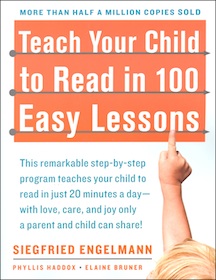 TEACH YOUR CHILD TO READ IN 100 EASY LESSONS

A Research-based Reading Program for Home Use

See below Dr. Kerry Hempenstall’s article for the technical details of instructional design of Teach Your Child to Read in 100 Easy Lessons – how and why it works.

Click here for over 2,500 reviews of Teach Your Child to Read in 100 Easy Lessons on Amazon.

Click here for detailed training and information videos on how to teach groups of children to read. 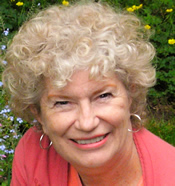 Dr. Kerry Hempenstall, Division of Psychology, School of Health Sciences, Royal Melbourne Institute of Technology (RMIT), Australia, wrote the following explanation of how “phonemic awareness” is taught in Teach Your Child to Read in 100 Easy Lessons:

Teach Your Child to Read in 100 Easy Lessons (Engelmann, Haddox, & Bruner, 1983) was developed as a program for parents to use with preschool or struggling readers. It is developed from a school-based reading program Reading Mastery Fast Cycle I/II Reading Program (Engelmann & Bruner, 1988; a former version of which was known as Distar).

The program follows the Direct Instruction principles of design, and the content emphasises the explicit teaching of *phonemic awareness (rhyming, blending, segmenting) along with 44 letter sound correspondences. These selected correspondences allow for the decoding of 95% of the sounds in the students’ typically available reading texts, and close approximations for 98% (Burmeister, 1975, cited in Grossen, 1995).

The phonemic awareness skills of blending and segmenting are taught orally initially, because there are fewer elements in the oral than the written task, and hence less likelihood of error. Blending is taught as a simultaneous rather than discrete-sound format – “mmmaaat” rather than “mmm-aaa-t” because the stimulus sequence of sounds is really a stretched form of the word “mat”, rather than a broken form in which the elements are completely separated. The authors argue that the mastery of continuous blending is a worthwhile objective because it provides more salient clues to the pronunciation of words. The oral blending activities proceed from large intra-word clusters to single phoneme blends.

Blending activities begin in the first lesson, and segmenting written words into constituent phonemes in Lesson 9. This latter process is assisted by the use of marks under the word that prompt the sounds one by one at the required pace. See Table 39 for an example of a blending sequence.

Other activities include: rhyming to promote a sensitivity to word families based on common endings (or rimes); sounds-writing because it prompts attention to the letter shape, and helps forge the association between shape and sound; story reading (from Lesson 13) involving successive segmenting and blending; and, picture comprehension (from Lesson 13). Pictures are provided after the story is finished to assist comprehension, but to avoid the picture cues being used in place of print cues in the decoding task. Sight words (from Lesson 13). Words that have been practised sufficiently often (using the segment-blend procedure) for them to begin to become familiar are “read the fast way”, that is, the child slides his finger under the letters to prompt a thorough viewing, but does not sound out the word, rather he reads it orthographically.

Supporting this cumulative skill acquisition and skill synthesis model are clear scripted correction procedures. There are two basic principles – the first is that correction be applied immediately following the error, rather than delayed until the end of a sentence, or waiting for self-correction. The purpose of the program is to teach accurate decoding of words based on information provided by the print, rather than relying on contextual cues to prompt a word’s pronunciation. Hence, the correction redirects the child’s attention to the source of the information – the word. The second principle specifies the basic correction structure – the child is notified of the error, given the correct response, allowed to practise this response, and finally tested on the original task before moving on. Additionally, a delayed test presented later in the lesson is often recommended.

The change from Distar orthography to normal print occurs over a three lesson period (Lessons 74-76), and after that time all print is conventional. By this stage the child is reading stories of about 200 words orthographically, and answering comprehension questions. According to the program designers the child should be reading at around a Year Two level at the completion of the program. The shift from letter by letter decoding to orthographic whole word recognition occurs in students who are able to analyse fully word structure (Stanovich, 1991), and have had many opportunities for practice of such words in isolation, and in connected text – particularly with words containing high frequency spelling patterns (Ehri, 1994). “According to Ehri’s (1992) work, the most effective way for beginning readers to store sight words in memory is to analyse fully the sounds in the spoken word and to match those sounds to the letters in the printed form of words. To do this, readers must know how to segment pronunciations of words into their smallest sounds, and they must know which letters typically symbolise those sounds.” (Gaskins, Ehri, Cress, O’Hara, & Donnelly, 1996, p. 315).

Given that the content of the 100 Lessons program focuses on the skill areas currently accepted as critical, that the style of teaching employs empirically supported effective-teaching principles, and that the instructional design principles ensure ample massed and spaced practice – it is reasonable to acknowledge that the authors’ claims that decoding instruction leads to eventual skilled whole-word recognition are defendable. Additionally the strong empirical evidence of the program effectiveness, described by Grossen (1995), and recognised in the Reading Excellence Act and by The American Federation of Teachers adds credence to the claims.

TOPA In a sub-study within my thesis, I measured changes in 26 students’ phonemic awareness over about 7 months during which 13 took the 100 Lessons program while the others acted as a waitlist control. I used the Test of Phonological Awareness (TOPA) (Torgesen & Bryant, 1994) which measures the capacity to use phoneme segmentation (or at least phoneme isolation). It provides analytic tasks that require children to be aware of, and be able to identify individual phonemes presented to them orally in a word. In the Early Elementary version, they are required to isolate the last sounds in 20 words, and compare them to those of other words. The authors describe the test as one of phonological sensitivity (or shallow phonemic awareness) rather than explicit (or deep) phonemic awareness because the test does not require the manipulation or pronunciation of the phonemes in the presented words (although one presumes such a capacity would be helpful). In Yopp’s (1988) factor analytic study, two factors were noted within the phonemic awareness construct, each relating to the level of demand on working memory. This test provides line drawings of the words in order to reduce the working memory requirements of the test. The test is designed to be used for early identification or screening (it can be used as a group test). In this study, it was used as a measure of change in phonemic awareness over the period of the intervention. The maximum possible score is 20 (indicating mastery), and raw scores were used in all analyses.

The findings of this small study are consistent with other research indicating that phonemic awareness activities embedded within a systematic, explicit phonics program may be sufficient to induce the alphabetic principle in all but the most phonemically-resistant students. This latter aspect has the potential for educational cost savings – in that specialised phonemic awareness programs may be applied more sparingly (and thus more efficiently over a wider population) if one can identify those students unlikely to progress with a less intensive approach. For the others, exposure to a well constructed phonics program (with some phonemic awareness activities embedded) may be sufficient to stimulate adequate phonemic awareness, and assist students to progress towards reading independence.

*[The relationship between phonics and phonemic awareness is often misunderstood. Phonemic awareness is an aural/oral skill that (at least in part) can exist without contact with print. At an advanced level, it involves the capacity to dissect the spoken word, and manipulate the resultant sound segments. Until contact with writing however, there is no communicative value in developing such a skill, and many children do not routinely pay attention to these meaningless segments of speech, and hence do not develop this capacity.